2. The role of the noise filter in the power supply equipment

The power supply of electronic equipment, such as 220V/50Hz AC grid or 115V/400Hz alternator, has various EMI noises, including artificial EMI interference sources, such as radio transmission of various radar, navigation, communication and other equipment. The signal will induce electromagnetic interference signals on the power cable and the connecting cable of the electronic device. The electric rotating machine and the ignition system will generate transient process and radiated noise interference in the inductive load circuit. There are also natural interference sources such as lightning. The phenomenon of discharge and the interference of noise in the universe, the former has a short duration but a large energy, and the latter has a wide frequency range. In addition, thermal noise is generated when the electronic circuit components themselves operate.

These electromagnetic interference noises, through the coupling of radiation and conduction, can affect the normal operation of various electronic devices operating in this environment.

On the other hand, electronic devices also generate a variety of electromagnetic interference noise during operation. For example, digital circuits use pulse signals (square waves) to represent logical relationships. Fourier analysis of their pulse waveforms shows that the harmonic spectrum is very wide. In addition, there are a variety of pulse trains with repeated frequencies in the digital circuit. These pulse trains contain more harmonics, wider spectrum, and more complicated electromagnetic interference noise. 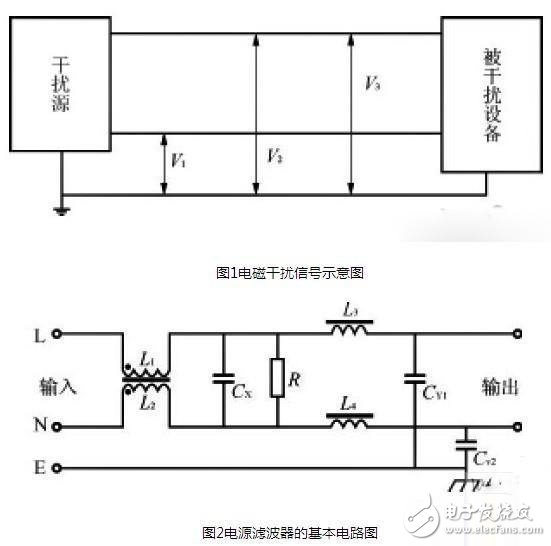 In addition, part of the EMI noise entering from the power input terminal may appear at the output end of the power supply. It generates an induced voltage in the load circuit of the power supply, which causes the circuit to malfunction or interfere with the signal transmitted in the circuit. These problems can also be prevented by noise filters.

The effect of using a noise filter in a power supply device is as follows:

(1) Preventing external electromagnetic noise from interfering with the operation of the control circuit of the power supply device itself;

(2) Preventing external electromagnetic noise from interfering with the load of the power supply;

(3) suppressing EMI generated by the power supply device itself;

(4) Suppressing EMI generated by other devices and transmitted through the power supply.

When the switching power supply itself is working and the electronic equipment is in the working state of the switch, terminal noise will appear at the input end of the power supply device, generating radiation and conduction interference, and also entering the AC power grid to interfere with other electronic devices, so effective measures must be taken to suppress . Electromagnetic shielding is the best way to suppress radiated interference from EMI noise. In terms of suppressing conducted interference of EMI noise, the use of EMI filters is a very effective means, and of course, good grounding measures should be used.

In the world, strict electromagnetic noise restriction rules have been implemented in various countries, such as FCC in the United States and FTZ and VDE in Germany. If the electronic device does not meet the noise limit rules, the product cannot be sold and used.

For all of the above reasons, it is necessary to design and use a grid noise filter that meets the requirements in the power supply equipment.

The noise filter for power supply can be divided into an integrated type and a discrete type according to the shape. The integrated type encapsulates an inductor coil, a capacitor, etc. in a metal or plastic case; the discrete type mounts an inductor coil, a capacitor, etc. on a printed board, and constitutes a noise suppression filter. Which form to use depends on cost, characteristics, installation space, etc. The integrated cost is high, the characteristics are good, the installation is flexible; the discrete cost is low, but the shielding is not good, and it can be freely distributed on the printed board.

4, the basic structure of the noise filter

The power EMI noise filter is a passive low-pass filter that transmits AC power to the power supply without attenuation, and greatly attenuates the EMI noise transmitted with the AC power. At the same time, it can effectively suppress the EMI noise generated by the power supply device and prevent it. They enter the AC grid and interfere with other electronic devices.

The basic structure of the single-phase AC grid noise filter is shown in Figure 2. It is a four-terminal passive network composed of lumped parameter components. The main components used are common mode inductors L1 and L2, differential mode inductors L3 and L4, and common mode capacitors CY1 and CY2 and differential mode capacitor CX. If this filter network is placed at the input of the power supply, L1 and CY1 and L2 and CY2 respectively form a low-pass filter between the two independent ports on the AC incoming line, which can attenuate the common mode interference existing on the AC incoming line. Noise, preventing them from entering the power supply. The common mode inductor is used to attenuate the common mode noise on the AC incoming line. L1 and L2 are generally wound in the same direction on the ferrite core of the closed magnetic circuit, and are connected to the circuit in L1 and L2. The magnetic fluxes generated by the alternating currents in the coils cancel each other out, so that the magnetic core does not cause saturation of the magnetic flux, and the inductance values â€‹â€‹of the two coils are larger in the common mode state and remain unchanged.

We eliminate tooling costs and save customers money by offering hundreds and hundreds of stock overmolds. For highly customized molded cable manufacturing projects, our advanced technology allows us to produce custom overmolds at a price and quality level that clearly sets us ahead of the competition.