GLED is a brand new invention product, which is a system engineering consisting of basic patents and affiliated patents. The purpose of this paper is to tell people that to make GLEDs good and good, in addition to the technical features involved in the patents, a large number of prior art combinations are needed.

GLED is a new innovation, an engineering of system, is founded by fundamental patents and peripheral patents. This text aim at telling people that to produce GLED with well quality required not only the technical characteristics described in related patents, but also optimum combination of plenty Of present prodution technologies.

The newly invented gas light-emitting diode: Gas-LED, with the publication of related patents, the publication of related papers, many manufacturers have begun trial production. Since there is no effective guidance from the inventors, many difficulties have been encountered in production, and there are many misunderstandings about the mechanism of Gas-LED (GLED). In order to make this "innovative electric light source with incandescent lamp appearance, energy-saving lamp effect and electrodeless lamp life" enter thousands of households as soon as possible, this paper wants to integrate the problems raised by these manufacturers and come to the post, and do the work in GLED production. Some discussion.

The GLED wick is composed of an Î©-shaped spiral cathode and a columnar anode in the cavity. The Î© shape of the spiral cathode is to first put the two ends of the tungsten spiral filament on the two guide wires of the truncated cathode of the stem, and then the part. The tungsten spiral filament is spot welded or clamped together with the truncated cathode inner guide wire; the columnar anode is located in the center of the inner cavity, as shown in FIG. 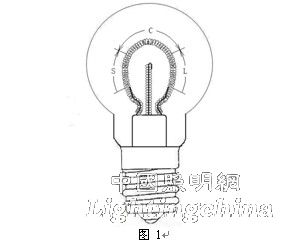 The two ends of the tungsten spiral filament are placed on the two inner guide wires of the truncated cathode of the stem, and the manual operation by the naked eye obviously has the problem of "difficulty in the stretcher and the pass rate". Here are a few process suggestions:

1. Manual stretcher should be guided by a magnifying glass;

2. Spot welding of the set spiral tungsten wire and inner guide wire must have protective gas;

3. The method and device for S-shaped clamping of Omega cathode filament mechanical method provided by ZL2009101673366.