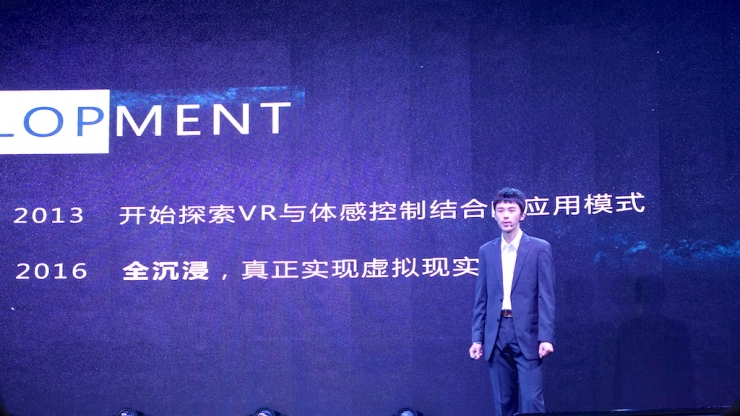 Many people have seen a video released by The Void. Many people in the video wear a VR helmet to play in a large space. Everyone feels very shocked. The Void is a VR theme park, and that video is just a promotional video. To realize this scenario, you first need a large space positioning program.

However, although the accuracy of Outside-in's optical positioning solution such as OptiTrack is high, the large space cost will be very high. So some companies are developing low-cost alternatives, including several entertainment technologies that just held their first product launch in Guangzhou.

The company launched two products at the press conference held on August 5th. One is the INAVR force feedback vest and the other is the INAVR multiplayer space positioning system solution. 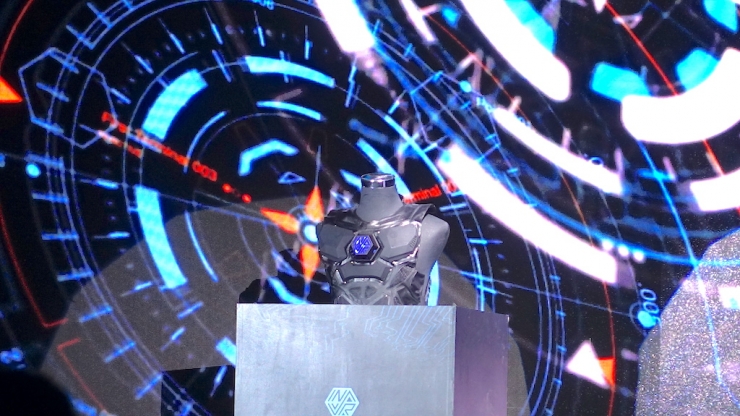 The INAVR Force Feedback Vest is an output device designed to give users a more realistic feel when experiencing VR. For example, when you are playing a shooting game, if the body is hit, this vest will give you a feeling of being hit.

According to the official introduction, this product priced at 2,388 yuan, the front of the vest has a 6-force action unit, followed by distribution in the waist, ribs and chest (two symmetrically distributed in each unit). In addition, there is a force acting unit at the back and right shoulder blades. Through eight force acting units, a variety of force acting modes can be realized, and the design can be controlled up and down, right, left and right. In addition, its four corners are equipped with four buckles, which can be quickly combined with a piggyback computer.

In the middle of the front of the vest, there is a cylindrical box, which is the control center of the vest and integrates the Intel Curie chip. The development of this product has been supported by Intel. 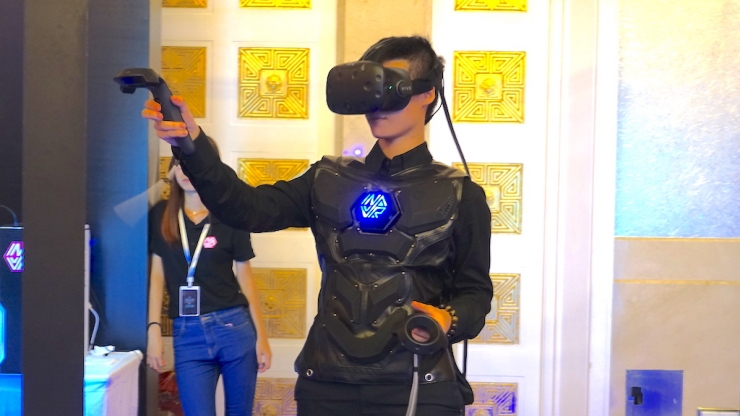 The following focuses on the other product launched by the company. The INAVR CAMERA full-featured camera , which is also supported by Intel , is mainly applied to large-space multiplayer positioning, and AR interacts with deep somatosensory sensation.

Before the conference, the company released a video showing an augmented reality application displayed on the mobile phone. From the demo, it is very similar to Google's Tango technology, which has been launched by Lenovo's first Tango phone.

Both INAVR CAMERA and Tango are positioning technologies for Inside out. Tango uses a depth camera and SLAM technology to identify the location of surrounding objects.

However, after communicating with Lin Yunfan, CEO of several entertainment technology companies, he stated that INAVR CAMERA is "not SLAM mode, it is Motion Tracking plus our algorithm fusion," and "does not need to use external markers."

A technical person in charge of the company told immersion (public number vrleiphone) that "this camera will capture the external environment and extract its feature points while having an IMU accelerometer inside to monitor its displacement, combining optical feature points and the IMU This technical solution for the sensor."

The technician then stated that it would use the Mark point to avoid the accumulated error of long-time (30 minutes or more) use. It indicates that the positioning accuracy of this system can reach the centimeter level, provided that the use time is within 30 minutes. 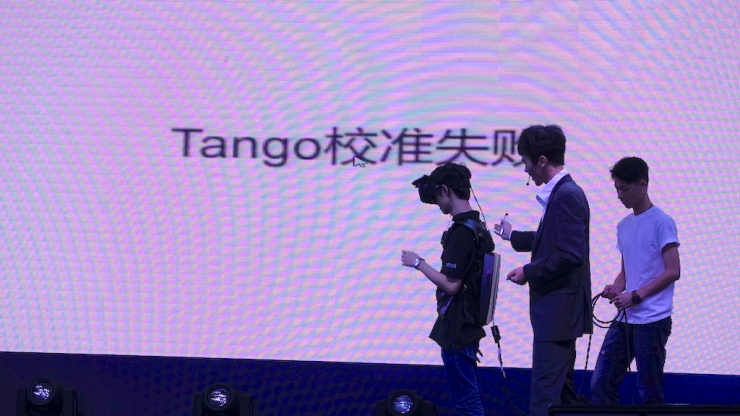 The scene also demonstrated the AR function of this product, similar to HoloLens, but the user sees the external scene through the camera. However, this demonstration was unsuccessful, and the same was true of VR demos. After the meeting, the technicians explained that the system would be affected in areas with high light contrast, and the dark environment of the venue plus bright spotlights was the demonstration. The reason for the unsuccessful. 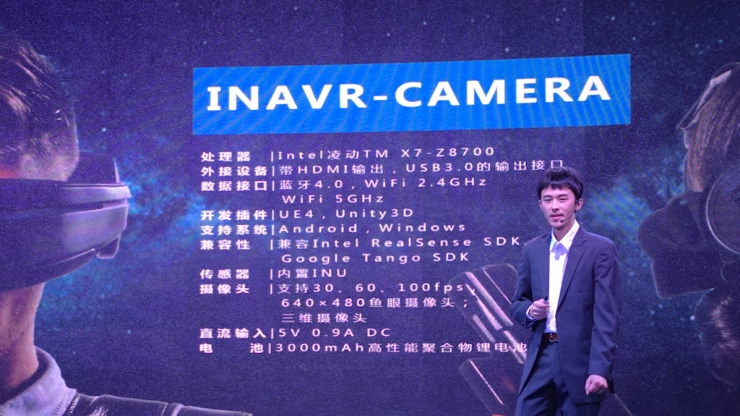 According to official sources, this product, which is much cheaper than the OptiTrack solution, costs $3388. It uses the Intel AtomTM X7-Z8700 processor, supports Andorid and Windows, is compatible with the Intel RealSense SDK and the Google Tango SDK, and has a built-in INU. The former said IMU sensor, immersive guess may be the scene PPT wrong, support 30, 60 , 100fps, 640 Ã— 480 fisheye camera, and three-dimensional camera. This is almost identical to the configuration of the Tango phone.

Previously, Johnny Lee, the technology god of the Google Tango project, said in an immersive interview that Tango can enable users to see other users in the same space, which is very similar to the technical application description of INAVR CAMERA. However, Tango is also exploring the application of VR in addition to AR. However, this technology still has some limitations, such as the problem of power consumption and heat generation.

Wang Rui, a technical expert in space positioning, explained some limitations of the camera's Inside out positioning technology in terms of immersion:

1, the problem of jitter, wearing a camera on the head there is a problem, when the user shakes his head, the observed image will change dramatically. The slight change in the attitude of the camera, the information changes brought about by the fact is particularly large, it is difficult to ensure the smoothness of the data. Whether it's the ant's Mark point program or the SLAM, the problem of jitter is common, and Carmack was also trapped in this problem.

2, a huge feature database, once you have more space for action, this database will become particularly large, basically the phone is unbearable. Therefore, it should be said that based on the current lightweight hardware devices, it is not possible to do a large-scale SLAM positioning.

3, the power consumption is too large, so the SLAM program is valuable, but have to wait until SLAM's asic chip energy production, at this stage more scientific research results.

For several entertainment technologies that emphasize their own use is not SLAM technology, Wang Rui said that even if not using SLAM, "estimate is also a similar concept, or is structured light, essentially identify the image and depth features and then locate."

INAVR may not be a complete SLAM, that is to say it intercepts a part of the SLAM process to do the operation, but it should still be based on image features to identify the program. Therefore, it also exists in several issues that have been mentioned before.

Lin Yunfan explained his technology to Lei Fengnet (searching for the "Lei Feng Net" public number) , and he said that they use the RGB camera plus algorithm to achieve spatial positioning, and can only determine the spatial position based on two-dimensional images. Wang Rui believes that this should be SIFT or SURF. It is not a very new technology and requires a large amount of computation.

(Note: SIFT (Scale-invariant feature transform) is a method to find features. It was published in 2004 and two years later, SURF (Speeded Up Robust Features) was released. SIFT and SURF are the most commonly used feature algorithms. Mathematical methods to understand the important basis of the image.Source "Learning with Hoevo Zhaoqing to learn VR/AR/MR Spatial Positioning Technology"

As for the actual results, only the unsuccessful demonstrations at the scene are currently seen. The experience of this product was not provided after the event, so further verification is needed. 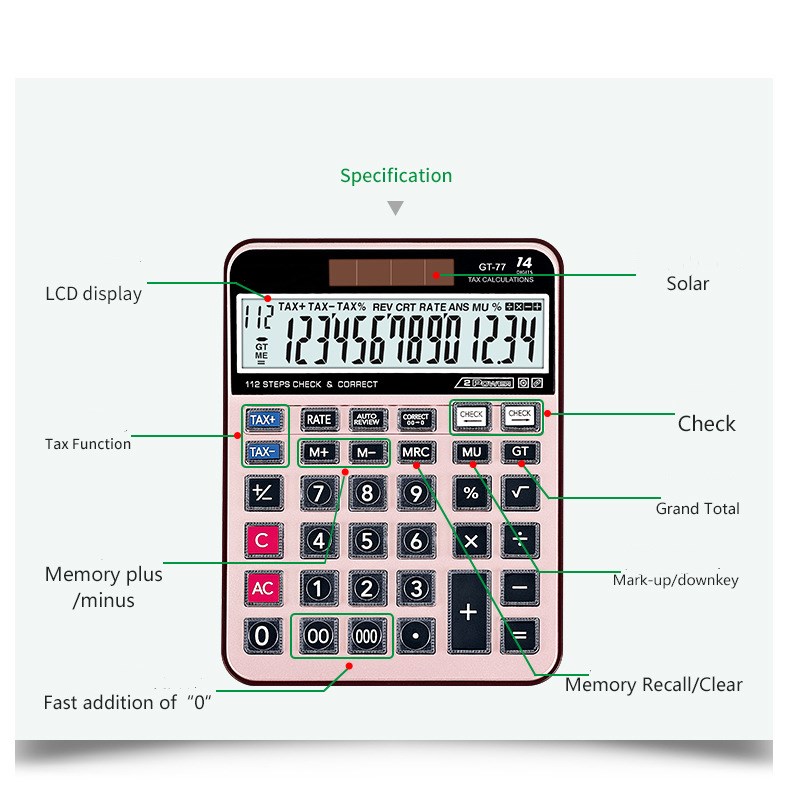